Home | About Us | Our History

The Society has changed in many ways since it was  first established. Please read on for a timeline of the more significant landmarks in its development...

1847 The Indigent Gentlewomen’s Fund was the brainchild of William P. Mitchell, a solicitor living at No. 12 Rutland Square, Edinburgh.  He persuaded titled ladies and gentlemen, professionals and members of the clergy to support the cause, and organised a Committee of Management and teams of local directors and collectors.   Funding was derived by subscriptions (2s 6d), donations and legacies—all by word of mouth “within society” rather than door to door collections.

1848 The first distribution took place of £848 to 154 ladies, each receiving either £5, £8 or £12 (£5 equivalent to £440 today).  Applicants had to be spinster ladies of 50 years and over, of professional parentage and impoverished through no fault of their own. They could not be in receipt of, or ever have received, Poor Relief from the Church.

1848-50 Sales of ladies’ work raised £3,897. This  income was used to create a Sinking Fund, from which cash could be withdrawn if needed to sustain annuities. This was invested in property and subsequently became the Society’s General Fund.

1865 The first Constitution for the charity was approved - ten years after the need for one was first identified to protect its assets!

1860’s A Gentlemen’s Committee was formed in Glasgow as gentle-born ladies were unwilling to visit merchants and manufacturers to raise funds.

1870’s Spinsters living in homes or institutions were admitted for the first time. Higher rate annuities were introduced for the older beneficiaries. 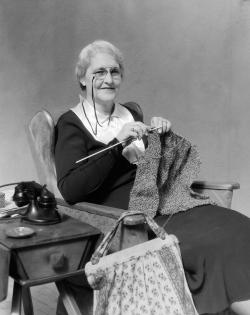 1898  Widows admitted for the first time but, fearing a large increase in applications, there were only a limited number of widow’s annuities provided for.

1900’s The first Ladies’ Committee was formed in Edinburgh and then in Glasgow in 1906. More than just groups of collectors, they elected Lady Presidents.   Then in 1907 Ladies’ Committee members started visiting beneficiaries in their own homes.

1908 The Government introduced non-contributory pensions of 5s per week for the over 70’s.   Receipt of pension meant a reduction in the IGF annuity, but no pressure was placed on ladies to apply for pensions, many seeing them as “state charity suitable only to the working class”. 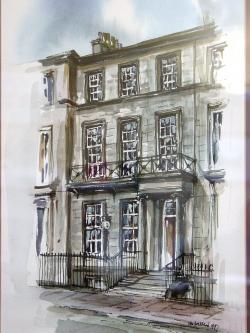 1909  The Society moved to 14 Rutland Square,  partly because the steps of its offices in Queen Street were too steep for visiting beneficiaries and directors.

1865-1914 No applicant who met the Society’s criteria was ever turned away for lack of funding.

1919 A bequest of clothing and jewellery involved the Ladies’ Committee in sorting and selling items, raising funds for the charity… a precursor to the charity’s “Clothing Department” some may remember.

1920’s The Ladies’ Committees finally gained voting rights to determine admission of applicants.   Prior to this “the ladies did all the work, the gentlemen took all the decisions”!

1920’s The charity received numerous generous legacies, many of which set rigid criteria for their use. Sometimes these were too onerous for the charity to accept.

1927  Widows over 70 years of age were admitted routinely.

1930  The charity was incorporated by grant of Royal Charter by King George V.   Thereafter the charity was entitled to use “Royal” in its name. 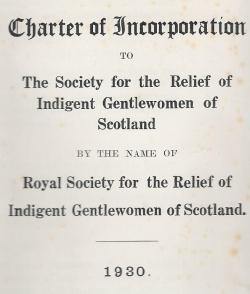 1930’s The depression hit both donors and beneficiaries.  There was a large increase in applications and enrolments, but by 1934 the charity had to freeze the minimum annuity at £25 and delay admissions.

1936 As a result of numerous individual bequests over the years, 40 different categories of annuities are being operated by  the Society’s staff...manually!

1939 The Beneficiary Roll peaked at 1406 ladies. The Poor Relief restriction was lifted for those no longer in receipt, and for the first time all annuitants  are required to give full details of their income.

1940’s Following the outbreak of World War II more women are engaged in war work and the  number on the Roll falls.

1960’s   The first ‘Lady Visitor’ employed to visit ladies in their homes, instead of this being done by members of Ladies’ Committees. The role was subsequently renamed ‘Almoner’ and from 1993 ‘Caseworker’. The charity has employed 14 “Visitors” to date. There was no longer any need for the ‘Annual Certificate’ whereby beneficiaries had to submit confirmation by a professional person that their circumstances remained unchanged.

1960’s   The Ladies’ Committees began to decline as fewer ladies were willing to collect and the need to do so was less important when legacies were holding up.

1970’s Support mechanisms and income ceilings were under constant review because of changing State Benefits. New grants  were introduced for heating, holidays, TV and telephones. “Christmas parcels” were introduced but were discontinued in 1990 due to DSS rules.

1982-83  Divorced ladies admitted for the first time.   Ladies also admitted on their own status, even if not of professional parents.

1987 Miss Peggy Wilson joined the  Committee of Management, becoming the first lady admitted to it in 140 years.    By  the mid-90’s there were three ladies on the Committee; today there are eight.

1988 Computers  were introduced to the  IGF office. The charity won The Scotsman’s “Scottish Computer User of the Year” Award. 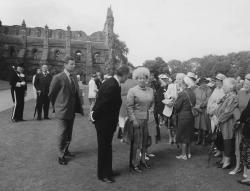 1994  Grants began to be paid directly into recipients’ bank accounts and from 1996 payments made in quarterly amounts.

1997  The charity celebrated its 150th Anniversary with all beneficiaries invited to a Royal Garden Party at Holyrood Palace, attended by HRH Princess Margaret.

2014-15 The Grant of a Supplementary Charter by Her Majesty The Queen opens a new chapter in the life of the charity.